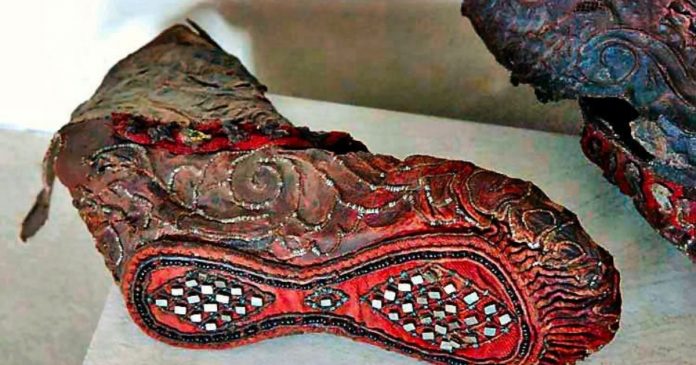 Archeologists discovering ancient artifacts while excavation is common though, it’s a rare situation to find antiques in pristine condition. In 1948, a women’s boot was found out in Altai mountains, Siberia. Despite it believed the shoe is 2300-year-old, it was surprisingly immaculate in condition.

This shoe has made up of soft red leather and designed with black beads and pyrite crystals in an exquisite way.

This stunning shoe was discovered with some other objects like jewelry, food, and weapons. Ancient Scythians were nomadic people who traveled the Eurasian continent. The place was found the artifacts, presume as a burial mound of them because burying dead bodies with the belongings is a Scythian funeral custom. When one of them died, they construct a wooden cabin and place the body with his or her essentials inside as they believed it helps the dead colleagues to have a better afterlife.

Historians believe that the way of burial and frozen ground of Altai mountains caused to preserve the boot in that perfect condition.

The other thing which made historians curious about this discovery was boot’s sole was elaborating with beads and it was spick-and-span. Some of the historians’ points of view are this shoe is specially made up for the funeral. And the other opinion is, it’s because Scythians often gathered around a bonfire on their knees and they designed shoe soles like this as they can show off in this position.

However, this exquisite boot is now in the collection of ancient artifacts of the state heritage museum-St. Petersburg, Russia.

In 1948, an ancient Scythian shoe from 2,300 years ago was discovered in the Altai Mountains.