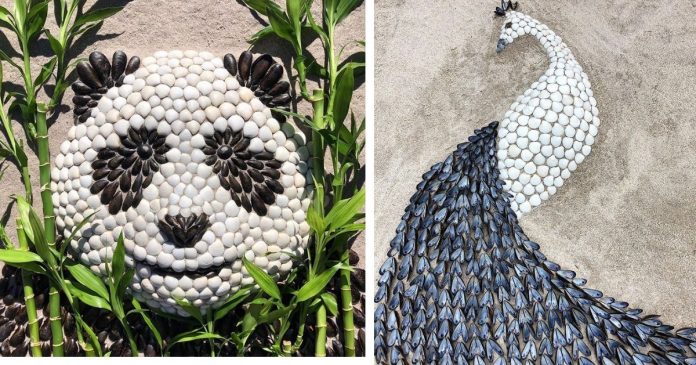 Covid 19 breakout brought a hard time for everyone’s life though, there are some little good things even in it, as the saying “every dark cloud has a silver lining”. It helped the people to think in a different way, helped to bring out the hidden skills and ideas in a creative way, with the isolating break it gave.

Anna Chan who is a New York-based artist who works as a designer & jeweler also explored her artistic talent with seashells during a pandemic. Seashells are such charming little pieces that elaborate the beach. But we never imagine that they could turn into such beautiful realistic animal portraits.

In the beginning, she went to Robert Moses state park at the beach with a different idea, where she started these animal portraits. “First I tried to make sand sculptures for the calendar of the year 2021. But then, the idea developed into this seashell artwork & now I’m really obsessed with this” she utters.

Even though the sculptors seem simple the process is difficult. Because it’s hard to find an exact piece of seashell that fills the mosaic to bring the expected elegant look. On the other hand, she uses only raw sand and water to get the basic shape of the sculptor. As the sand falls apart easily by nature, it needs to make sure she adds the exact amount of water to make sand moist enough to keep the shape steady until the whole mosaic is done. As she says, from collecting shells to complete the portrait it takes at least 3 days, if it’s a huge one.

At first, she used to create these sculptures at the beach itself, but later as she starts more intricate and bigger mosaics, she has to change her working place to home because it took a lot of time.

Her first creations were demounted as they were fugacious though, the portraits she created lately can be seen at her home garage. And just as she improved her sculptors to keep permanent, they’d display at a gallery or somewhere they deserve to be.