An amazing close-up picture of a stormy cloud, which captured the ideal time! 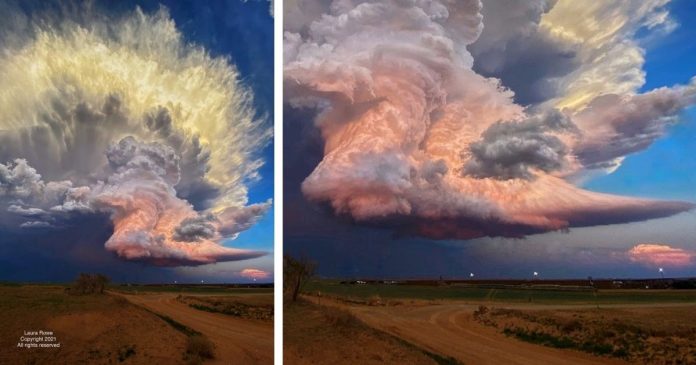 Laura Rowe, a nonprofessional photographer has captured an outstanding picture of a stormy cloud. While the cloud is already impressive, the mystical glow of sunset which comes through the cloud has given that wow look to the image. It just seems like a fiery explosion in the sky! Besides the wonderful view of the photo, the other unbelievable thing is this snap was just captured with a smartphone, an iPhone 11.

Now, this picture goes viral on Twitter and It’s no surprise due to its breathtaking view. However, Laura who is surprised with the unexpected grand response for the photo she took, states about the incident.

“I was just on an outing with my boyfriend around East Texas. Just as we left the Muleshoe National Wildlife Refuge, we noticed a tornado is coming from a distance. Then we decided to chase the storm to get a closer look. We drove down muck roads, stopping every once in a while, to take some photos. And the place we took this photo was our last stop. Actually, we thought it’s already too close but fortunately, the cloud was moving some other way. I took few pictures though my phone was about to die. I had no idea at the time this photo go so viral. The response I got is quite incredible. With the inspiring messages that the world sends, I really feel blessed.”

She is working on getting a copyright for the picture now and says she hopes to learn more about Not only photography but also artist’s rights.

If you are interested in supporting Rowe’s photography, you can buy a printout of the storm cloud photo from her website.