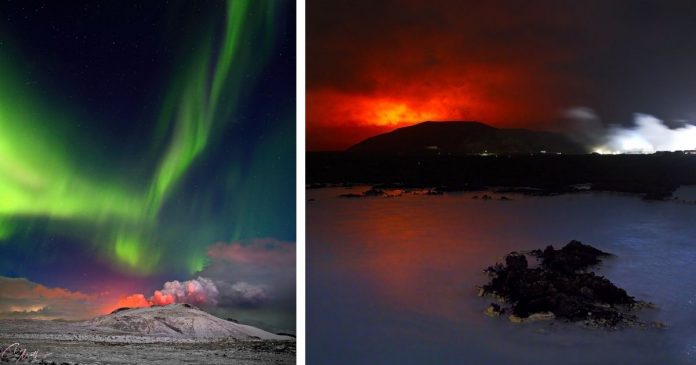 How about aurora borealis and erupting volcanoes happening together? Can you imagine the flood of northern lights covers the sky behind the ablaze volcano? Well, now we don’t have to just imagine, we can see a real incident through Christopher Mathew’s portraits.

Mathews, who brings us these incredible photos, is a former legal professional living in Iceland for years and enjoys photography. Iceland has magical landscaping, and also many volcanos too. This country was even dubbed as “Land of ice and fire” because of this.

Geldingadalir volcano, which created this magical event is also one of them, located in Peninsula nearby famous Blue Lagoon. Just as it got to know thatGeldingadalur volcano is ready to erupt, Mathews also gets ready to capture the scenery. Actually, He was waiting to seize the moment since early 2020 by keeping eye on the volcano monitoring system.

Eventually, at the beginning of March 2021, it defected that magma coming up towards the earth. So, it was clear that the volcano would blow at any moment in the near future. “I started wandering the area in advance. I wanted to be more familiar with the location as I was eager to get some good shots. And I found even some back roads to reach the location, in case main road covers by lava.” He says.

The main road was blocked as he guessed but not with lava but with authorities because they went in to evaluate the harm. However, as all photographers let into the location in the first night of lava glows, he headed to the blue lagoon to capture the reflecting lights of the volcanic outburst in the water.

Then he waited for the perfect weather to shot erupting lava with the enchanting background of northern light, in a nearby rented cottage. But things didn’t work so easily as he thought. “An unexpected snowstorm came covering the whole sky and the magma and I was about to give up. But still, the luck seems on my side, and eventually, storm clouds started to fade away, giving me rays of hope. I hurried towards the edge of the farm were the perfect place to shot. Just as I got there, aurora flashed through the high atmosphere winking that it’s the moment! And I shot few snaps while green shades of aurora elaborating the background of the fiery volcano. Surprisingly, it was the midnight of 24th March which is Mathews’s b’day. And it’s pretty sure it must be an unbelievable birthday gift for him!

Scroll down to see the magical moments of the land of ice and fire.