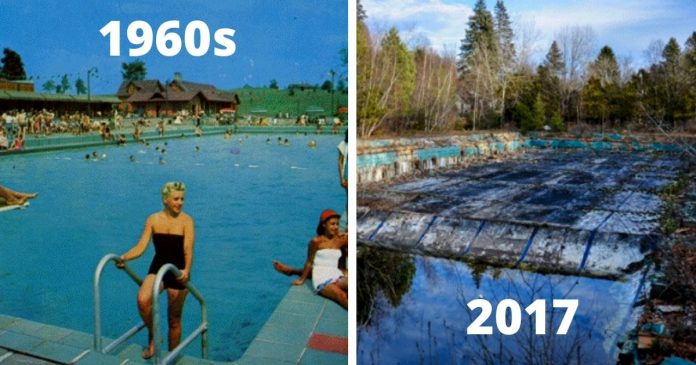 An antique matchbook on photographer Pablo Iglesias Maurer’s desk grabbed his eye not long ago. It was the postcard-like picture of a resort complex erected in the 1960s that drew me in. It made Pablo wonder how the once-famous monument looked now, and the answer inspired him to create the incredible Abandoned States photo series.

The old photograph was titled How to Run a Successful Golf Course, but when Maurer arrived to Penn Hills Resort, it was evident that the owner had ignored that advice. He created a ‘5-decades-after’ image of the abandoned place by pointing the camera at it in nearly the same area.

“There’s a haze to old postcards—the destinations were never as wonderful as they appear.” I, too, have trouble getting the two photos to line up. Time, on the other hand, blurs the distinctions and brings everything into sharper focus.”

Check the incredible series of before and after pics below!

Grossinger’s indoor pool in action. The tiled floor was heated, and the entire building was cooled. The swimmers below are bathed in the glow of stunning mid-century “sputnik” chandeliers. There are training facilities, a gym, a salon, and a variety of other amenities beneath the pool. The pool has been abandoned since the late 1990s and is beyond repair.

Grossinger’s olympic-sized outdoor pool, built in 1949 for $400,000 (about $5 million in today’s market). The private cabanas, dressing rooms, and lounges that used to surround it are now gone.

The carpet in this Poconos dining hall has turned green, the color of the moss that has replaced it.

On the southern end of the renowned “Borscht Belt,” the Homowack Lodge currently lays abandoned. A four-lane Brunswick bowling alley can be found on the basement floor, which is perhaps the place’s centerpiece. Its days are numbered. The resort shuttered in the mid-2000s, but it was revived temporarily as a Hasidic retreat and then as a summer camp, which was forced to close when the New York Department of Environmental Conservation ruled it unsuitable.

Grossinger’s tennis center is located inside. Grossinger’s rye bread, a local favorite during the resort’s operation, is advertised on the back of the postcard. “The joy and fresh air folks experience here at Grossinger’s certainly gives them an appetite,” says resort princess Jenny Grossinger. They adore all of our meals, but our Grossinger’s rye and pumpernickel bread is a particular favorite. This same nutritious, tasty bread is now available at your local grocery shop. Try a loaf of bread. I’m confident you’ll enjoy it.”

Swimming and sunbathing in the Poconos. 1967 was the year of the postmark. “Dear Jonnie: If you were only here, I’d take you horseback riding or golfing.” Until I see you, be good. “Dr. Waterman,” I said.

After a fire destroyed the main structure at this Poconos resort in the early 1970s, a replacement was built. A contemporary spacecraft nestled up deep in the woods is a very remarkable sight.

Grossinger’s indoor pool, which first opened in 1958. Florence Chadwick, the first woman to swim the English Channel in both directions, took the first plunge in the pool, which was opened by Elizabeth Taylor. “…The new indoor pool at Grossinger’s was the peak of the Catskills,” according to Ross Padluck’s superb “Lost Architecture of Paradise.” Nothing like it had ever been built before, and nothing like it will ever be built again. It embodied everything that was great about the Catskills in the 1950s: opulence, elegance, modernity, and fame.”

The “resort world’s most contemporary showplace,” according to the description on the back of this Pocono resort’s postcard. Even in deterioration, it retains its magnificence with a seating capacity of 1200. This postcard is also filled out and stamped. “I’m having a great time here this weekend. Rowing a boat and playing shuffleboard are the only ways to get some exercise! It’s nice to be ladylike and not be in a hurry! “We’ll see you soon,” says the group.

A now-defunct resort in the Poconos’ martini lounge. The inscription on the back of the card reads, “Peaceful rest — healthy recreation.”

“Swim n’ Sun Indoor Swimming Pool at Penn Hills Lodge and Cottages” is written on the inside of the matchbook. “The Finest Modern Resort in the Poconos.”

The Mies van der Rohe-inspired “Jenny G Wing” was one of the last structures built at Grossinger’s, opening in 1964. It was built by renowned architect Morris Lapidus, who nearly single-handedly established the “Miami Modern” appearance in hotels and designed the Capitol Skyline Hotel in Washington, D.C.

In the Poconos, a set of stairs leads down to an abandoned theater. The last time the curtain was drawn here was in the early 1990s.

“Birchwood is the only resort with three swimming pool facilities, an indoor pool, an outdoor pool, and a lake with beach,” reads the postcard caption. Eagle Lake, at the foot of the Village Green, is shown here. Couples may relax on the white-sand beach, relax on chaise lounges, ride bicycles or row boats, and fish off the coastlines… Indoor swimming, aircraft trips, movies, bowling, horseback riding, all winter sports, and 40 more free activities are included in six low-cost all-expense package plans!” More recently, the hangar at the resort’s airfield served a different purpose: after a weeks-long manhunt, police killer Eric Frein made the hangar his home and was arrested within a stone’s throw from Eagle Lake.

The Homowack resort in the Catskills has a lane attendant.

A view down the side of the same 1970s building. “The dining area, cocktail bar, lobbies, and offices are all housed in an ultra-modern edifice.”

A Poconos resort’s residential structure has fallen into ruin. “Dear Bernie —” reads the reverse of the postcard. Don’t think we forgot about you — we’re having so much fun that sending postcards is a pain! This is life, and the location and the people are magnificent. We’ve never been happier or had more fun. We’ll talk again shortly! Love, Lou and Shiela are a couple.