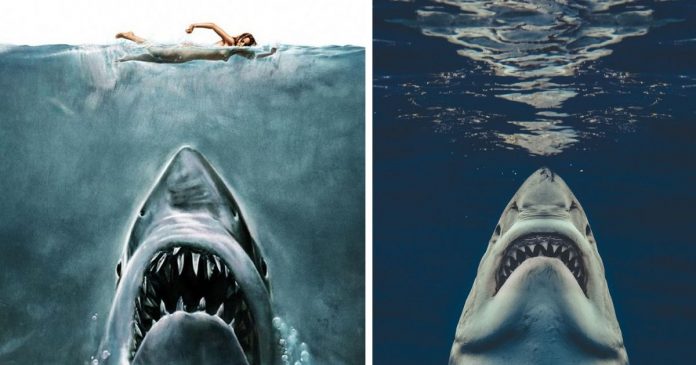 Euan Rannachan, a photographer and also a shark lover has captured an incredible photo of a great white shark in its striking pose with an open mouth which recalls the iconic poster of the famous movie ‘JAWS’,1975.

The movie poster was painted by artist Roger Kastel based on a taxidermy shark and it became one of the most recognized cover images in the cinema industry for years. For Rannachan, the photo he clicked which mirrors the classic image of ‘JAWS’ is a dream come true. “This is a photo that Not only I but also my shark lover friends have been trying to take for years,” he utters.

Euan was captivated by sharks since childhood. Now as a photographer he dives into the sea to photographs the sharks and their majestic behavior as great hunters in the ocean. As he says he has dived with sharks countless times. During the trip to Mexico’s Guadalupe Island, he shot this ultimate photo just 35 feet away while diving in a safety cage. “Things happened so fast down there and I was ready to capture if one passes by nearby. It was not so late in the night when I was backing up footage, I saw it and I just shot quickly,” he speaks about the lifetime moment.

All he wants is to share his love for these incredible animals with a larger audience. “It always excites me how powerful and precious they can be, while being completely under control.” He hopes people will realize they are not such heinous creatures as they are often made to be.

Rannachan was able to get up close and personal with the great white shark from the safety of a cage.

Take a look at some of the other incredible shark photos he took during his adventure.