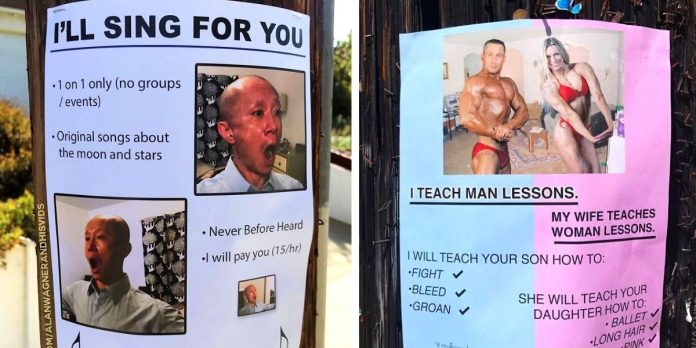 Alan Wagner is a stand-up comedian as well as a video editor. He’s created a number of posters that have been shown across the city. Alan was previously renowned for one of the posters, which included an alarming invitation from an old woman for guys to “bathe in my milk.”

Scroll down to see some of his other works. The hoax was a success, he told the New York Post, with a million views on the website in only a few days. He also claimed that while working as a director and video editor, he got an idea for a beverage company. It was, however, turned down because it was too bizarre. Alan, on the other hand, had enough faith in it to build it nonetheless, and he was perfectly accurate. Now he’s putting up funny bogus advertising, missing pet posters, and help wanted banners all around his neighborhood. I hope you enjoy and spread the word about this amazing collection.

More Info & Images and all the credits go to: Instagram/truewagner