Every year for the past 40 years, these father and daughter have taken photos in the same spot. 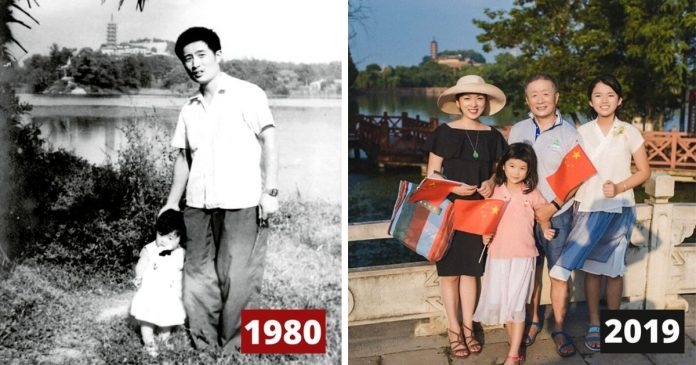 Every parent is aware of how quickly their child develops. It seems as though you’re changing their diaper one day and then they’re asking for $30 to go to a concert the next. That’s why it’s crucial to savor every time you have together – and Chinese father Hua Yunqing knows a thing or two about savoring moments. For the last 40 years, the guy has had a yearly practice of shooting photographs with his daughter Hua Hua in the same location.

He had the first photograph shot when he was just 27 years old, and he had no intention of making it a tradition. And after seeing the photo, he made up his mind to go back to the same area next year and do it again, according to the guy in an interview with the Daily Mail.

The family only missed the photograph once, in 1998, while Hua Hua was traveling.

Hua Hua gave birth to her first daughter is 2008 and her second in 2012, and the entire family was delighted to carry on the tradition. “When I first started, I never imagined I’d still be doing this when I was in my 60s, and my daughter is now a mother of two,” the parent added. Let’s hope there are many more photographs to come!

Here’s Yunqing looking over the photos in his album

Yunqing was 27 years old at the time of the first photograph, and his daughter was just one year old. He had no intention of making this a tradition at first. But that all changed when he viewed the first shot and fell in love with it.

“I had no intention of doing the same thing again,” he added, “but when I received the shot back, I liked it so much that when we went back the next year, I duplicated it.”

“After that, it became a family custom, and we did it every year with the exception of one year in 1998, when my daughter did not join us for the family vacation and was overseas,” Yunqing explained, pointing out a short gap in the images.

Things have changed dramatically throughout the years. Yunqing became a grandfather when his daughter grew up to be a lovely woman with a family of her own. Hua Hua’s first daughter was born in 2008, followed by her second daughter in 2012.

“I never imagined I’d still be doing this when I was in my 60s, and my daughter is now a mother of two,” he said, adding that he was pleasantly pleased by the favorable responses to the family images online, even if he didn’t plan to keep the practice going indefinitely.

Originally published on the earthwonders