In only five days, Russia’s coldest city receives two months’ worth of snow, and the images are surreal (30 Pics) 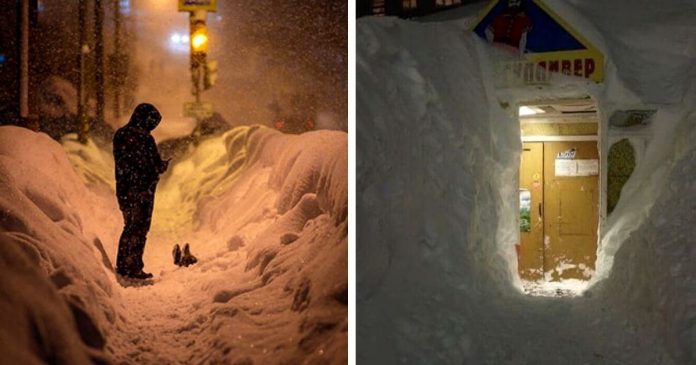 Unless you live in Florida, no winter paradise is complete without a smidgeon of snow. Even a few inches will suffice as long as you have enough time to shoot a snowy selfie. And there’s nothing like the first snowfall of the season to convert us all into tiny kids, temporarily putting our frantic adult lives on pause.

People in Russian Siberia, on the other hand, aren’t “dreaming of a white Christmas” like in Sinatra’s song. Because, in Norilsk, Russia’s northernmost city, residents are subjected to 45 days of darkness each year, with temperatures as low as -27.4°F in February.

And now, the city has been engulfed in a five-day snowstorm. The hydrometeorological center in Krasnoyarsk reported that 194 percent of the monthly precipitation had fallen in the previous week. In addition, residents must contend with freezing wind gusts of 22-27 meters per second.

The photos from the Siberian snow and speak for themselves, and as entertaining as they appear to be, one can’t help but wonder how the residents cope. This requires survival abilities that Bear Grylls would be proud of, from digging up their automobiles to having the road signs swept over by snow.

Norilsk, located 200 miles north of the Arctic Circle, is noted for its harsh climate. It is one of Russia’s coldest and darkest regions, with residents facing a permanent darkness of arctic winter beginning in early December. The darkness lasts around 30 days, from November 30 to January 13. There is the desolate wilderness of northern Siberia beyond the city, which has a population of roughly 175,000 people.

According to The New York Times, the city is not only known for its frigid environment, but it is also one of the largest polluters, “leaving an area twice the size of Rhode Island into a dead zone of lifeless tree stumps, sludge, and snow.” Norilsk Nickel is the world’s biggest palladium producer and a key supplier of metals such as copper and nickel.

“At one time, the firm belched more sulfur dioxide a year than all of France,” according to the New York Times. As a result, the Daldykan River in Norilsk, which passes through the factory, has turned crimson. The majority of residents spend their free time indoors, especially during the winter months.

Locals are too chilly to walk even short distances outside in the winter, thus freelance cabs have become a flourishing industry. Buses are also available, but waiting for one until it arrives might be difficult, therefore it’s typical to hide in a neighboring shop and wait for the bus.