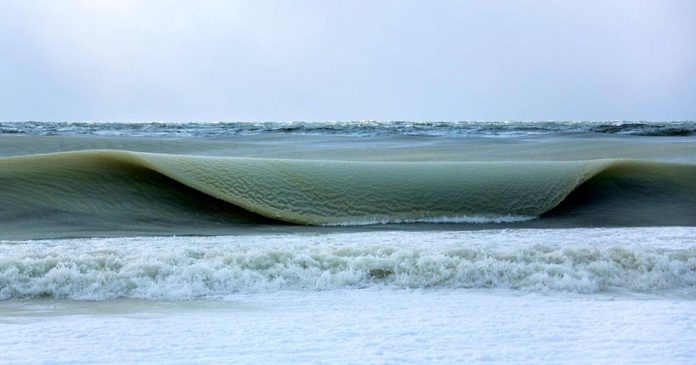 Photographer Jonathan Nimerfroh was confronted with an ocean of Slurpee. The Atlantic Ocean’s waters seemed to be frozen as a result of the extremely chilly temperatures. Every year, lakes ice, but freezing seas is an uncommon occurrence.

The photographer, surfer, and ocean lover set out to capture the magnificence of this once-in-a-lifetime occurrence. The half frozen waves swirled and crashed against the shore, looking like they were formed of something heavier than water. “The wind was blowing from the southwest,” Jonathan says, “which would normally generate difficult or choppy conditions, not so nice for surfing.” However, because the sea’s surface was frozen slush, the wind had little effect on the form. They were dreamy slush waves to die for.” This strange event is depicted in the photos below.

They were a strange, thick consistency.

The unusual look of the waves comes from the shifts in the water and air temperature.

When he took these photos, the temperature in Nantucket was 19°F.

In “Stay Wild Magazine,” he talked about the day he took the photos: “Just been super cold here. The harbor to the mainland is frozen solid … The day after I took these it actually froze up the shoreline for 200 yards out.”

Jonathan is “obsessed with the ocean,” and, in addition to his sea-centric photography, is an avid surfer.

Check out this video to see the Slurpee waves in action:

Originally published on the beautyofplane

Share
Facebook
Twitter
Pinterest
WhatsApp
Linkedin
ReddIt
Previous articleGoogle Earth released satellite images to demonstrate the dramatic changes that our planet has undergone in only four decades.
Next articleThe 3D Creature Graffiti by a French street artist is not for the faint of heart (30 New Pics)