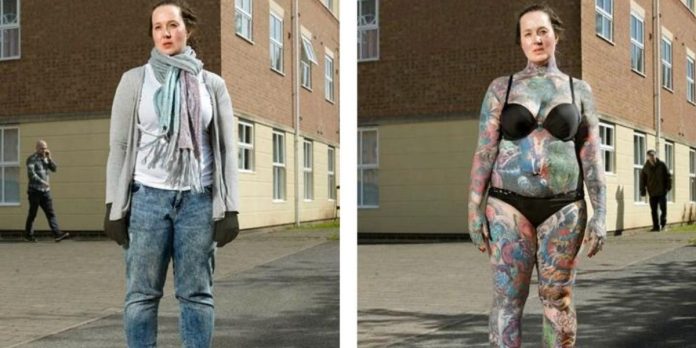 For many people, their skin serves as a canvas for stunning body art. Some people stop after one or two tattoos, while others continue until large portions of their bodies are covered in vivid ink. COVERED, a tribute to people prepared to go to the tattooing extreme by British photographer Alan Powdrill, depicts these fearless bodies. His collection includes two photographs each person: one in which they are wrapped from head to toe and another in which they display their intricate tattoos.

The eye-opening images highlight the complexities of human identity. Clothes represent only a small portion of their life for these folks. Powdrill’s subjects are corporate executives, dedicated laborers, and responsible parents who dress in suits, fitted jeans, and ironed shirts. We see these clothing in a specific light when we wear them, one that indicates a “refined” mentality. When they’re naked, though, it reveals a another side of their personality, and it raises the question: do we alter our minds about someone once we see they’ve got a gigantic tiger on their back? Also, can a single photograph fully capture the depth of a person’s personality?

Powdrill met the subjects of COVERED at tattoo conventions and on social media. He discovered scores of individuals eager to show off their work as word of the initiative spread. All of the photographs were taken outside of the sitters’ houses, and Powdrill included a meaningful comment about their tattoos with each one.

Above: “My tattoos are part of who I am and I’ll always love my bodysuit now and when I’m 80. The love I get for what I look like is what it’s all about.” (Victoria, 37)

“I was 17. I hid the first few from my parents for many years and by the time they found out they knew this was going to be my life.” (Philip, 27)

“I was 51 when I started and my father was already dead and my mum didn’t say anything as she was in the early stages of dementia.” (Graham, 58)

“Me mum wasn’t happy at all about the swallow on my hand so I said ‘Look mum it’s not like I’m on the street doing heroin.” (Alex, 49)

“Can’t say what age I’ll stop. While there’s still space to fill, it’ll get filled. I don’t think my attitude will ever change.” (Michelle, 53)

“They have given me confidence in life since my Crohn’s illness. I will love them in the future like I do now.” (Peter, 38)