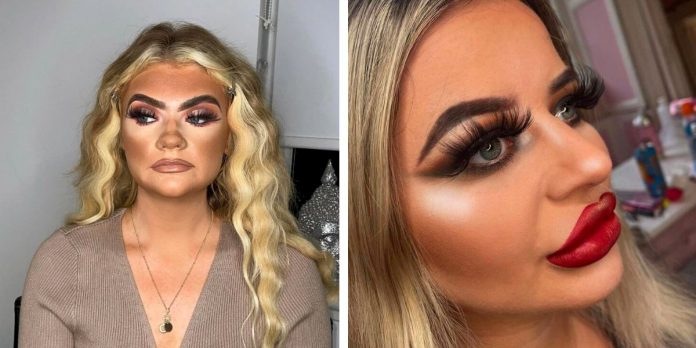 Makeup has tremendous power. Any person’s appearance can be improved, and the positive features of cosmetic use can be highlighted. Because of this, makeup is necessary in many contexts. In the worlds of theater, film, and modeling, it is crucial. But the distinction between “good” and “bad” is vanishingly narrow. Unfortunately, some cosmetic artists follow the “larger and fatter” philosophy and disregard this universally accepted principle. As a result, naïve girls who schedule an appointment with such a master end up with subpar work that, among other things, only inspires amusement and consternation.

Aggressive contouring at its finest

Her eyes look tired because of such heavy makeup.

The client is only eleven years old

Not anymore. Now she’s a 30-year-old sugar baby who thinks she’s a powerhouse in the luxury world.

That very moment when the makeup artist matched the tone to the jacket, and not to the face

Now for some blush! Ready!

It’s hard to say what was better here – eyebrows or lips.

These are images from the page of a certified makeup artist

I prefer the second one because it eliminates the illusion of rat teeth.

There is something to see here

Some makeup artists believe that all women want to be more orange.

I dipped my brush into nacho cheese.

It could be worse

The work of a British makeup artist. Just look at this hairline

Would you buy a contouring course from this makeup artist?

How to become a bronze statue.

Looks brighter than an Oscar statuette.

At first glance, it looks like a joke, but it’s not.

It will look amazing on stage!! I can see it from the moon.