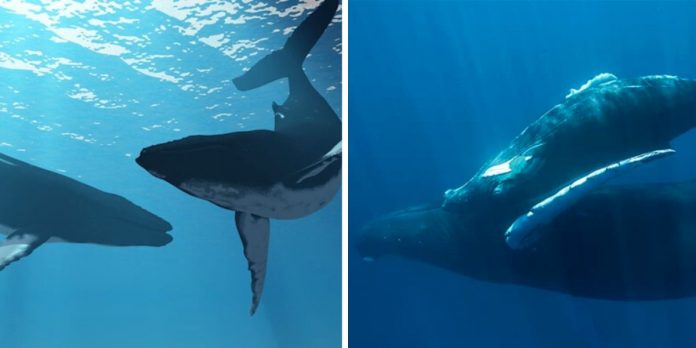 The lovely and mesmerizing sound of whale singing is rarely heard by most of us. But if you have, the songs won’t sound exactly alike. Similar to humans, whales also see cultural evolution through their sounds. Male humpback whales, for example, tweak, embellish, or vary specific elements of a conventional song sequence, which other whales in the group pick up on and pass along. This causes the song to evolve over time.

New studies now demonstrate that “song revolutions” also take place. From a nearby whale population, a completely new song will occasionally be acquired. In actuality, whales can be heard singing the same songs from 8,700 miles (14,000 kilometers) apart.

The majority of baleen whales, including humpback whales, and probably all oscine songbirds exhibit song, according to a team of researchers who have published their findings in the Royal Society Open Science Journal.

Whales in French Polynesia and Ecuador’s breeding seas are singing the same songs as humpback whales off the east coast of Australia. The same sounds, however, might be combined in somewhat different yet distinctive ways in each location. Each whale song has a number of these sound phrases that are repeated repeatedly, almost like a chorus. The subjects of the whale songs do, however, occasionally change; the old is replaced by the new, and all of a sudden a brand-new song is at the top of the charts. Surprisingly, the new song is not necessarily specific to one group or even one region of the world.

Before, it was understood that humpback whales 6,000 miles apart sang the same songs. According to recent studies, certain whale calls have traveled 4,970 miles from French Polynesia in the west all the way to South America in the east (around 8,000 kilometers). Some people think that whale songs could possibly be heard all over the world.

The authors write, “This study reveals songs first recognized in western populations can be transferred across the whole South Pacific, confirming the potential for a circumpolar Southern Hemisphere cultural transmission of song and a vocal culture second only to our own in scope.” Humpback whale research in South Africa and Brazil suggests that a complete circumnavigation of whale sounds may be quite conceivable because the melodies are passed down from one group to another.

Researchers have compared the qualities of humpback whale songs to those of songbird songs. Their study “sheds light on the underlying mechanisms of social learning and cultural evolution in animals ranging from fish to other cetacean species through to humans,” according to the researchers.

But precisely how can the whale melodies spread from one humpback group to another? Although the exact mechanism causing this phenomena is unknown, it is highly likely that it has something to do with how whales migrate to various locations for mating and foraging. The researchers think that the songs are transmitted gradually from one location to another due to the substantial traveling that whale groups engage in. When a herd moves to another region to feed or care for their calves, they bring the song with them. A song revolution may start in one group. Humpback whales in nearby populations catch up on the song, take it in, and then transmit it to another group.

The meaning of whale songs is currently a subject of ongoing research. It is evident that whales, just like humans, like a catchy song that occasionally tops the charts among their peers. Or, in the universe of their undersea songs, it might even spread worldwide.

The way songs are transmitted from one whale group to the next probably has something to do with the whales’ regular travels to various locations for foraging and breeding.https://depositphotos.com/?SSAID=314743&sscid=91k6_12kvo3&utm_source=shareasale&utm_medium=cpa&utm_campaign=314743&SSAIDDATA=SSCID_91k6_12kvo3

Listen to the incredible range and variation of whale songs on this YouTube video: