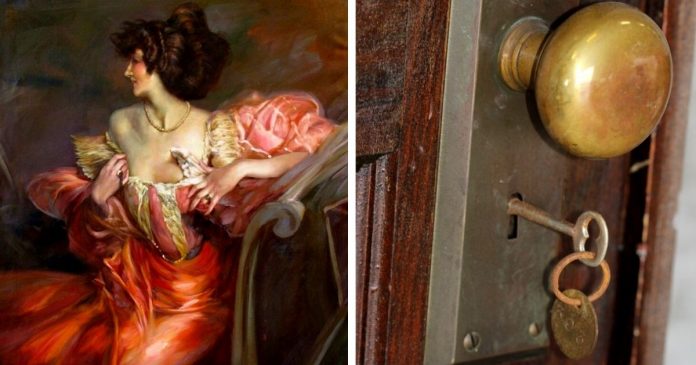 A Parisian flat was closed and abandoned in 1939. An auctioneer came across a curious glimpse of the past and a multi-million dollar work of art seventy years later.

Madame de Florian, who was 23 years old at the time, must have been disappointed to have to leave her opulent abode. It was the outbreak of World War II, and she was most likely informed that German troops were heading on Paris.

She hurriedly packed her belongings, closed the door to her Parisian flat, and drove south to the free zone and safety.

This attractive lady would never return to her opulent apartment, even if she continued to pay rent for the rest of her life. At the age of 91, she passed away in 2010.

The flat was discovered by Madame de Florian’s heirs after her death. They engaged an auctioneer, Olivier Choppin-Janvry, to catalog the apartment’s contents. Given how long it had been since the flat had been used, Olivier and his colleagues were perhaps a little nervous when the last bolt was unlocked and they entered.

The auctioneer’s breath must have been snatched away as the door opened. During World War II, the flat was a frozen point in time. Dust hung in the air, and there were cobwebs everywhere.

The furniture included antiques from the early twentieth century. Dishes, glasses, and other eating necessities remained fully stocked in the dining room. Artwork had been taken from the walls, as if it were being prepped for removal and the owner was running out of time.

This elaborate, delicately crafted vanity table still had brushes, cosmetics, and perfume bottles on it, as if it were still waiting for its lovely owner’s return.

Original Micky Mouse and Porky Pig dolls sat in a corner, reflecting the time era. Walt Disney himself would be ecstatic.

A painting of a gorgeous woman in a pink evening gown was the most stunning and interesting find. The woman in the painting turned out to be the former resident of the flat, Marthe de Florian, who also happened to be Madame de Florian’s grandmother.

The artist’s identity was unknown at the time. Later research revealed that the painting was created by Giovanni Boldini, a well-known Italian painter of the Belle Epoque period.

In the 1880s, Marthe de Florian was a well-known Parisian actress who lived a sumptuous lifestyle as a “high-society” girl. The apartment had a collection of love letters wrapped with various colored ribbons, as well as proof of her many prominent suitors, including numerous French Prime Ministers and Presidents.

Aside from the fact that Marthe was the subject of Giovanni’s artwork, one of the love letters revealed that she was also the object of his adoration. Marthe was 24 years old when she produced this daring work of art in 1888. It was auctioned for $3.4 million after its discovery in 2010, making it the most expensive painting among Giovanni’s works.

Watch the video below to see more of this lavish residence and travel back in time.

The mess left in the apartment was comprehensible, especially given that Madame de Florian’s sudden departure was most likely due to WWII conditions. However, there are still many unanswered questions. Why would she decide not to return? And why would she continue to pay rent in the same manner for the next seventy years?

It must have been quite an experience to open such a treasure box of antiques after such a long period had gone. Hopefully, the family will provide additional details in the future, but until then, the remainder of the narrative will remain a mystery.