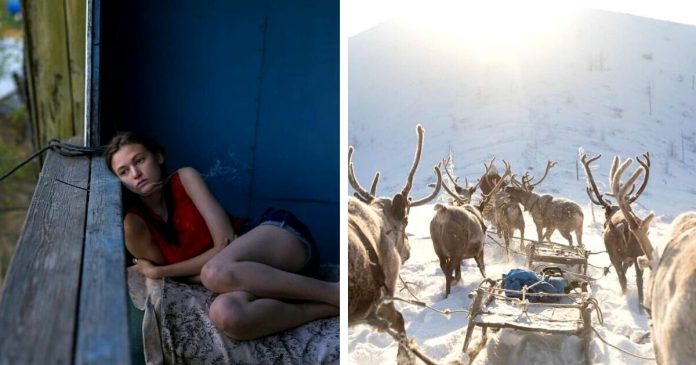 Many people find winter to be excruciatingly uncomfortable and irritating. At least for those who live in areas of the world when the weather is cold and there is a lot of snow. However, Yakutia, commonly known as the Sakha Republic, in Russia, tops it all off with winters that may reach -50 degrees Celsius (-58 Fahrenheit). The area is 5,300 kilometers from Moscow and has a population of over 1 million people.

Aleksey Vasiliev, a Yakutian photographer, chose to document the Yakutian people’s everyday lives and challenges, demonstrating what it’s like to live in such a freezing environment and what they do to pass the time. “I was an alcoholic in the past,” the photographer told Bored Panda. I needed to replace the vacuum that the alcohol had created when I quit drinking. Then photography came along and helped me to see things in a different light.”

We were able to speak with Alexey, and he told us what motivated him to produce these photographs: “My lovely Yakutia, where I was born, grew up, and still reside.” Although I used to fantasize about going throughout the world. Yakutia appeared to me to be a hole in the ground, a cold desert.”

Alexey used to drink a lot of alcohol, but he has replaced that nasty habit with painting and photography: “I used to drink a lot. When I stopped drinking, I needed to do something to replace the void inside of me. I used to spend all of my free time with friends at a pub, and when that was over, I didn’t know what to do. After that, I opened Instagram and began photographing. This activity gradually began to captivate me more and more.”

“I had never studied photography before 2018,” she says. Education was unimportant to me. It was simply a pastime. However, in 2018, I was awarded a scholarship to attend the DocDocDoc photography school. When asked if he studied photography somewhere, Alexey answered, “I studied documentary photography and shot my project about Yakut movie, ‘Sakhawood.'”

Alexey claims he doesn’t spend much time editing his shots and isn’t particularly skilled with Photoshop or Lightroom: “I hate to waste my time editing my photos.” For those interested in the technical aspects of his images, he uses a Canon 5D Mark IV and a Fujifilm X100F.

Alexey elaborates on Yakutia and what it’s like to live there: “The winters in Yakutia are brutally cold and lengthy. Winter frosts can reach -50°F or even -60°F (-58 Farenheit to -76 Farenheit). We had to live in -60 degrees Celsius for a period this winter since it was so cold. People would prefer to sit at home all day, drink hot tea, and wait for spring if it weren’t for the daily desire to go out. Life comes to a halt in the winter, when a dense fog obscures the sun for weeks or months due to severe frosts.”

“On Saturdays and Sundays, there are relatively few people on the street. The long, frigid winters, on the other hand, have created a type of Yakutia brand that visitors from other nations are keen to learn about. For the majority of citizens, this is an unavoidable reality. Despite this, not everyone want to leave Yakutia, where we have access to the internet, a movie, a museum, and even a children’s library. We are not choosy in our pursuit of the finest benefits of huge cities; instead, we strive to be pleased with modest things and the natural beauty that surrounds us. In the lives of my people, nature is extremely important.”

“Despite the fact that winter is the brand of Yakutia, summer is the most favored season of the year since it is short and hot,” Alexey explained about summers in the coldest area. It lasts roughly a month, from mid-June to mid-July, and temperatures can exceed 40°C (104 Fahrenheit). We like relaxing in nature and walking until dawn.”

“I’m not sure whether this can be termed a pastime, but I adore watching TV series (I love the Office), movies, and lounging on the sofa all day,” the photographer says of himself and his life. I’m just an ordinary person who picked up a camera and began documenting the world around him. I didn’t set out to be a photographer; it just occurred. Yakutia, my mother, and photography are three of my favorite things. “Thank you very much.”

“Come to Yakutia and you will see how wonderful this country is,” the photographer said, inviting people to visit. This is a journey you will remember for the rest of your life. “I swear to you.”

What are your thoughts on these images? Do you want to go to Yakutia? Tell us what you think in the comments, and don’t forget to upvote your favorite image. Also, go support Alexey and his stunning photography!