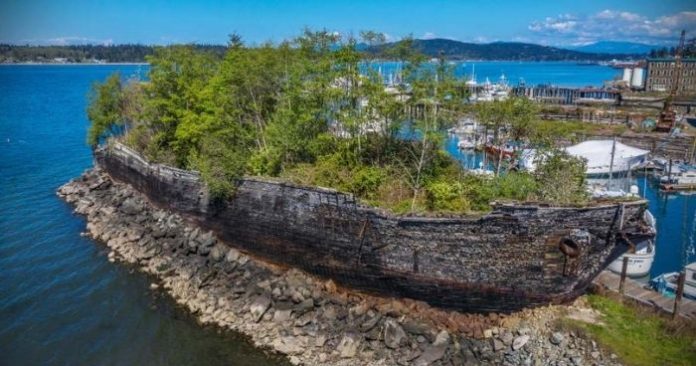 We have seen ships are used for different purposes like military activities, to transport goods and people so on. But have you ever seen a ship, using as a Breakwater?

The ship named La Mercedes once proudly voyage the sea now stays still yet serving in a different form as a breakwater due to creative recycling. And it can be seen at Lovric’s shipyard in Washington state, Western US.

This four-masted schooner has served people for years since 1917 for different purposes. First, this ship was used in world war Ι as an auxiliary schooner, then to trade lumber between Portland and California, and then for shipping oil from the US to Australia and New Zealand. After that, this majestic ship’s voyage ended though, its avail didn’t end anyway. After being used as a floating cannery until its working life ends, in 1965 it was vended for salvage. Anton Lovric, a life-long entrepreneur is the one who bought the ship and after being removed propellers, engines, and deck fittings, in 1966 it was moved to his shipyard where it remains today. Lovric thought to recycle this old ship in an unusual way and that’s how this shipwreck turns into a protective breakwater.

Eventually, La Merced was officially recorded in the national maritime register in 1990, becoming a part of maritime history. After years, now historic La Merced’s hull is filled with sand and a small jungle grown on it. But surprisingly it’s still good in shape and remains watertight. It becomes famous among photographers because of its green and ancient appearance.