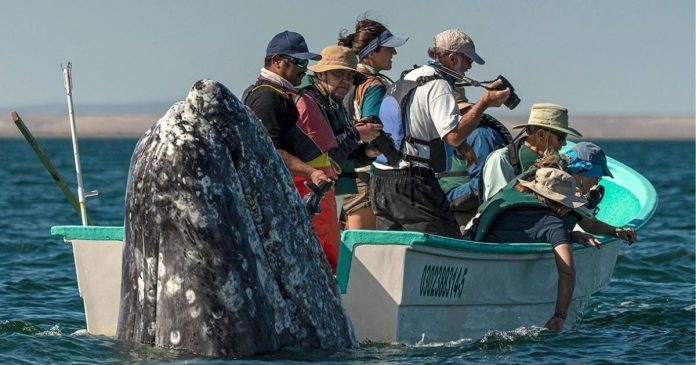 Sometimes we need luck just as a talent to achieve success. Especially in a career like photography, lucky coincidences can give a lifetime photo. This is about a photo that goes viral in cyberspace. It’s a snap of popping up gray whale breaching the water of Baja’s San Ignacio lagoon while all the whale watchers looking away, captured by Eric J. Smith.

Eric J. Smith is a professional in photography who has 25 years of experience in the field. And he always wandering the world with his camera in hand to capture any moment worth last long more than just a memory. In March 2020, before the pandemic lockdown starts, Smith visited the Baja’s San Ignacio lagoon to shot some snaps of migrant gray whales.

While Baja’s San Ignacio lagoon is famous for whale watching, there’s a special couple of whales dubbed as ‘Pair of cow and calf’. On a particular day while a small group of tourists watching whales from a  small boat called ‘panga’, baby whale ‘calf’ appeared from the front see and while all the people looking forward to him, ‘Cow’, the mother whale popped her head from the behind with the action called “spy hop”. Smith was the lucky one who saw the whole incident from a panga that arrives behind. And he could seize the moment with his camera and his talent

This is the second photo of Smith’s which gone viral. The first one was in 2015 and it was a picture of a man who’s looking at his mobile phone and an enormous whale appearing from the water. Isn’t it that amazing both viral photos include whales? seems like these majestic creatures bring him luck.