This group has 50 hilarious and spot-on recreations of old photos. 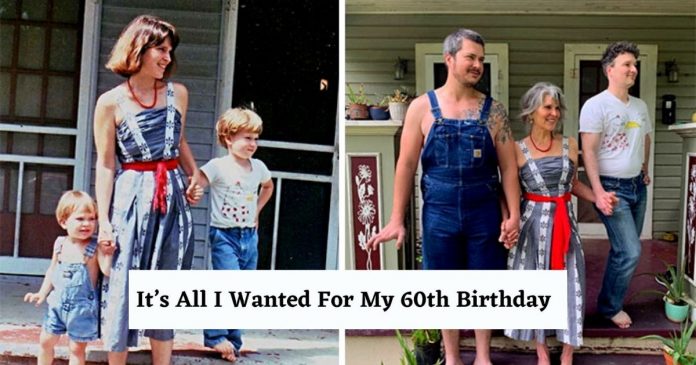 You can’t go back in time. You may, however, duplicate it. When you’re done, snap a photo and post it to the r/PastAndPresentPics subreddit. Everyone else is doing it.

These guys are open to everything, whether it’s a strange childhood recollection, a passionate adolescent event, or an honorable ancestor homage.

We at Bored Panda hand-picked a selection of the greatest posts we could discover on the subreddit and even managed to have a pleasant talk with its employees about all that goes on in this healthy online community to give you an idea of how to pull it off.

For more similar content, check out our similar publications from before here and here.

r/PastAndPresentPics is handled by two people: the originator, u/NateTrib, and the moderator and CSS, u/enfrozt. Fortunately, they were both willing to answer a few questions for us.

“You’ll find our most popular photographs are from 2 years ago, 7 years ago, and 4 years ago if you sort the subreddit by ‘Top,'” u/enfrozt told Bored Panda. “The subreddit has been around for a while, and some of our front-page entries date back a long time.”

“There was a recent post that I really liked,” the moderator added. “It shows a person from cub scout to eagle scout in the past and now.” It’s really interesting to see how they’ve grown up while still wearing the same clothes.”

#3 The Most Poignant Pastandpresent Pic I’ve Seen To Date

The popular favorites, according to u/NateTrib, are images duplicating a prior shot in which the individual strives to nail every detail, including the setting, stance, and wardrobe.

“Shout out to my father, who wore the identical shirt 25 years later as we recreated our family Christmas photo!” u/NateTrib has been added.

“Because the subreddit is so specialized, when someone takes the effort to make a legitimate Past And Present Pic, the community offers them a lot of love!”

#6 Me As A Baby Wearing A Ridiculous Wig vs. Me At 21 With The Hair I Ended Up Growing

The subreddit currently has 62.2K members. People are interested in/entertained by other picture recreations, according to u/enfrozt, since we all have a warm place for nostalgia. “Whether it’s going down a street in your old neighborhood, smelling your mother’s homecooked cuisine, or enjoying ice cream from a nearby store that tastes just as it did when you were a kid,” they noted, “memories from the good times can stimulate positive feelings.” “I believe that the older we become, the more we reminisce about the ‘good days,’ the wonderful childhood recollections.”

The moderator believes Andy Bernard’s statement regarding r/PastAndPresentPics is particularly appropriate: “I wish there was a way to know you were in the good old days before you really left them.”

“Take up a hobby, study a language, play an instrument, go to a different country,” u/enfrozt said. “It’s never too late to start doing that one thing you’ve been putting off, and make every day count.”

#11 When The Student Pulls A Reverse Uno On The Teacher..

#13 My Son And I Planted Our Faces On A Copier, Then And Now

#14 My Parents Took Pictures Of Us Asleep In Weird Positions When We Were Kids. We Recreated The Photos As Adults, But Just Look Like A Bunch Of Drunks!

u/enfrozt pointed out that the subreddit has few posts, but the ones it does have are generally excellent. As a result, it’s not about quantity but rather quality. “I believe the subreddit is the right balance of a small enough community to avoid attracting too many trolls and a large enough population to provide us with material.” On Reddit, we have a terrific community in our tiny area.”

If you happen to have any old photos laying around, the moderator recommends gathering your family and friends and reenacting your photos. “You can make new memories out of old memories,” they added. “Take a look back at where you started and enjoy a laugh or two while you’re at it!”

#16 Biff Got What He Deserved After Almost 35 Years.

#19 For My Mom’s 60th Birthday, My Brothers, My Cousin And I Recreated A Photo From My First Day Of Kindergarten.

#20 I Came To This Courtroom With My Class In Kindergarten. Today, 14 Years Later, I Finished My Internship With The Judge In The Same Courtroom.

#22 They Were Neighbours Since The Birth, The Photo Was Taken On The Bride’s 3th Birthday By Her Parents

#24 15 Years Later And We Still Have That Mall Photo Shoot Swagger!

#27 My Sister Got Married Over The Weekend, So We Recreated This Gem From Our Childhood

#28 I Found An Old Pic Of Me Playing Computer Games. As It Turns Out I Haven’t Changed Very Much

#30 Perfect Past And Present Strangers

#36 Passing Down The Baby Express To My Own Son

#40 My Grandma’s Lebanese Passport Picture From 1955 (Left) And Me In The Present (Right). Christmas Gift To My Dad Last Year

#45 My Boyfriend And I Discovered We Had Matching Photos As Ninja Turtles-Obsessed Preschoolers. We Knew What Had To Happen Next.

#47 Tony Hawk Around 1983 And Earlier This Year At Sanoland In Cardiff, Ca

#50 He’s Come Such A Long Way. Much Love For Steveo