Until now, no one has been able to capture this 3,200-year-old tree in a single shot. 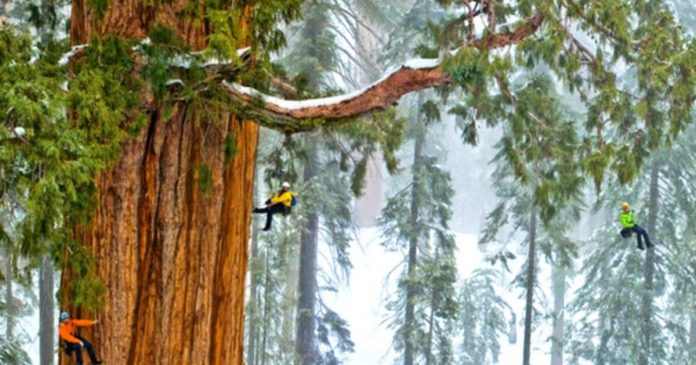 The giant trees of California’s redwood forests are well-known, but one spectacular tree in particular stands out.

The world’s third biggest tree in terms of volume may be found on the western slopes of the Sierra Nevada Mountains.

Locals call it “The President.”

Even though “The President” is not the world’s tallest tree, it stands at 247 feet (75 meters).

The tree’s age, though, is possibly its most astonishing statistic.

In 1923, the sequoia, often known as the gigantic redwood, was named after American president Warren G. Harding.

And “The President” continues to develop at a rapid pace.

Every year, the huge redwood adds a cubic meter of wood to its bulk.

No one has ever been able to capture the massive tree in a single photograph before.

However, a crew from National Geographic decided to give it a go.

With the use of wires, the team was able to collect all of the images they need in order to merge them into one massive image.

“The President” was captured in one photograph after 32 days and 126 photos.

Watch a video about how the team managed to capture the amazing shot here:

Sometimes nature offers up something so amazing, you have no choice but to gasp in awe.

“The President” is a shining example of how important it is to take care of our land and our forests.

I really hope this tree will stand at least another 3,000 years in the future. Share this article if you agree!