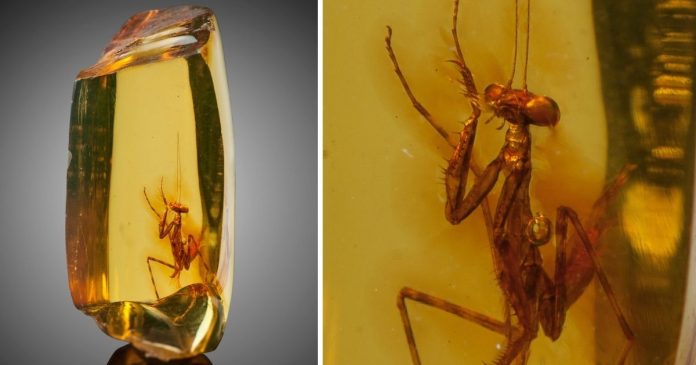 Isn’t it amazing to see millions of years old creatures in mint condition just as alive?

The prehistoric praying mantis has found, frozen in a piece of amber which is about one inch tall. And it has sold in Heritage Auction for $6000 in 2016. The peculiarity about this little piece of frozen resin is, being crystal clear and gives an incredible view of ancient mantis, even after millions of years. This pristine piece of amber is called Dominican resin and is found in the Dominic Republic.

The amber piece has derived from an extinct prehistoric leguminous tree, Hymenaea protera. The tree belongs to the Oligocene period which lasted 23 million years to 33.9 million years. This was an era in which the prehistoric ecosystems started changing into the modern ecosystem of the Miocene period.

At present, 2400 species of mantis can be seen in a tropical climate and the whole environment, including trees and animals, has drastically changed comparatively archaic era though, this little insect doesn’t seem much different.

However, this well-preserved ancient mantis is a perfect specimen for prehistoric insects.