The Dracula Parrot Is Both Scary And Beautiful. 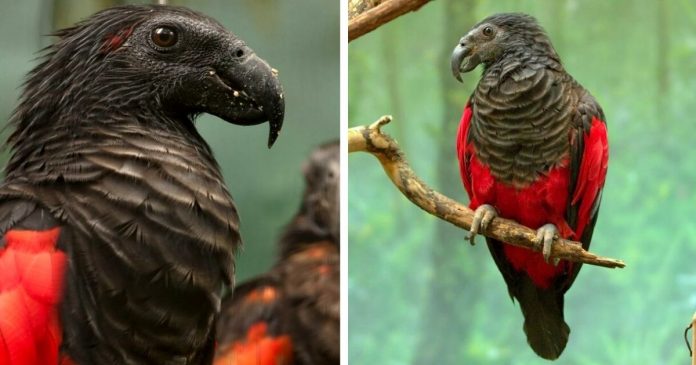 The head of a vulture, the body of a parrot, and the size of a little child from beak to tail.This is the Dracula Parrot, not a mythical monster.

The Dracula parrot, also known as Pesquet’s parrot or the vulturine parrot, is only found in the cloud forests of New Guinea’s foothills and lower slopes.

A fully developed Dracula parrot will have a body length of 18 inches and a length of nearly a meter from beak to tail tip.

What makes it a Dracula parrot? There are several causes for this.

Its terrible cry is one of them. It sounds “harsh and rasping; also described as snarling,” according to parrots.org.

In flight, a long, drawn-out scream is also common.”

Yeah, I wouldn’t want something like that to wake me up at 3 a.m.

The Pesquet’s parrot is a highly specialized frugivore that only eats a few varieties of figs. It’s one of three parrots with no feathers on their heads.

It’s assumed that this evolved to keep the parrot’s feathers from being tangled with the fruit pulp it eats. It’s understandable if you’ve never heard of this bird.

According to Red List, their numbers are extremely low, and they appear to be on the verge of extinction.

There are only between 20k to 49k adult parrots alive, and their numbers are steadily dwindling. The species is under tremendous hunting pressure for its feathers, and people are invading its habitat.

“Hunting for feathers has escalated with population expansion,” according to Red List.

Current rates of hunting-related loss are unknown, although they might be minimal, and the species appears to be secure in wide expanses of appropriate habitat in central and western mainland Papua New Guinea, much of which is located in rough terrain with low human population density.”

In other words, with fewer people around, the parrots enjoy longer and better lives. There are many species that we are only now learning about, and many more that we have yet to discover. Let us do everything we can to keep this planet and all of its people safe for future generations.