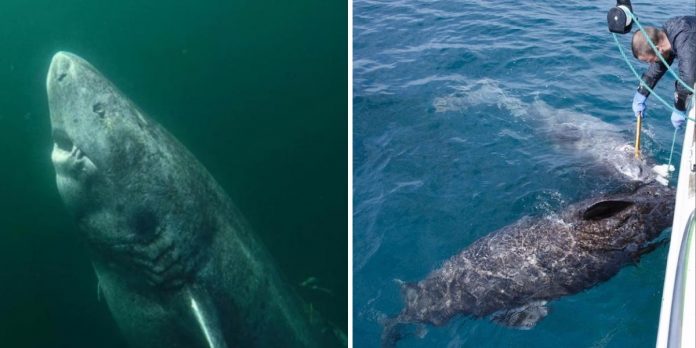 It’s difficult to picture anything alive now who was born in 1505. Martin Luther became a monk in that year, while King Henry VIII called off his engagement to Catherine of Aragon… in other words, a long time ago.

But that’s essentially what scientists believe they’ve discovered in the shape of a giant Greenland shark swimming in the Arctic Ocean’s cold waters.

The shark is thought to be as old as 512 years, making it the world’s oldest living vertebrate and even older than Shakespeare. And you thought being 30 meant you were old.

Greenland sharks can live hundreds of years and spend the majority of their time swimming about hunting for a partner. That’s an awfully long time to be waiting.

They also grow at a one-centimetre-per-year rate, allowing scientists to age them by measuring their size.

This shark, one of 28 Greenland sharks examined by experts, was 18 feet long and weighed more than a tonne, indicating that it could be anywhere between 272 and 512 years old.

According to the Sun, the shark’s age was disclosed in a study published in the Science publication.

If scientists are correct about the shark’s age, it lived during key historical events such as the establishment of the United States, the Industrial Revolution, and both World Wars. Crikey.

Greenland sharks consume largely fish, however they have never been seen hunting. In certain cases, reindeer and even horse remains have been discovered in their stomachs. In Norway, the animal is considered a delicacy, yet its flesh can be toxic if not handled properly.

Academics in Norway believe that the bones and tissues of Greenland sharks can provide insight into the impact of climate change and pollution over time due to their lengthy lifespan.

Researchers at Norway’s Arctic University are tracing the animal’s DNA and studying its genes to understand more about what controls life expectancy in different species, including humans.

Because many of the sharks predate the Industrial Revolution and large-scale commercial fishing, they’ve been dubbed “living time capsules” that could reveal how human behavior affects the oceans.

Professor Kim Praebel, speaking at a symposium organized by the Fisheries Society of the British Isles, said, “The oldest living vertebrate species on the globe has created numerous populations in the Atlantic Ocean.”

“We need to know this so we can establish proper conservation measures for this critically endangered species.”