Wonderful illustrations of extinct animals and their present relatives 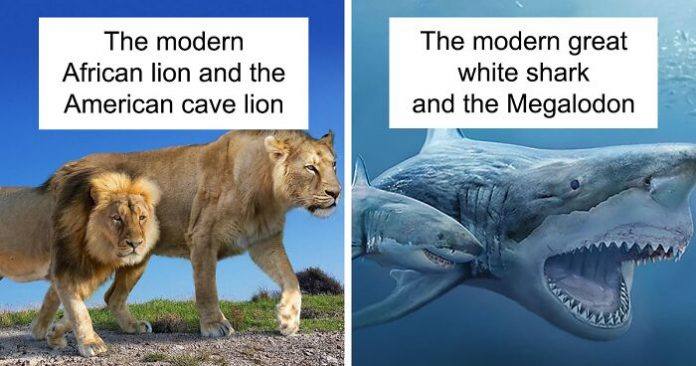 How about including a bit of present and a bit of past inside the same frame? Not so clear, right? Here’s the thing, a creative and talented soul called Roman Uchytel creates wonderful illustrations of extinct prehistoric animals and their present relatives, giving us more insight into changes in the quaternary period. Sounds interesting, isn’t it saw feed fellows? Come, let’s have a glance at how animal ancestors look like and how their descendants look now, at once.

Roman’s most illustrations are Pleistocene era animals, in other words, ice age mega-faunas. This glacial period started 2.58 million years ago and lasted till 11.5 years ago. When it comes to the end of this ice age, almost all mega-faunas vanished from the earth. It’s yet to explain why such enormous creatures, who survived even in the hard ice age, vanished when the earth starts becoming greeny. Scientists presume that they couldn’t hang on in the continuous weather change and ultimate transformation of the ecological system.

Anyway, when it comes to artists, he has done a pretty good job. The illustrations show us the size comparison of those plus size extinct animals together with their present relatives in a really creative way.

He draws based on information. Studying ancient creatures lived on earth was his hobby since childhood and that’s what helped him to create such outstanding pictures in addition to his knowledge of Photoshop and his artistic abilities.

When he was a teenager he really excited about extinct animals and read a lot of prehistoric literature. Later his hobby was to draw them studying their skeleton. He has even published a book already and you can find it here.

Now, He’s up to another awesome work with his wife Alexandra, who is a great writer, which also related to prehistoric animals. That dream is to publish a book of prehistories, in other words, series of pre-historic fairy tales. Let’s wish him luck with all his creative plans.